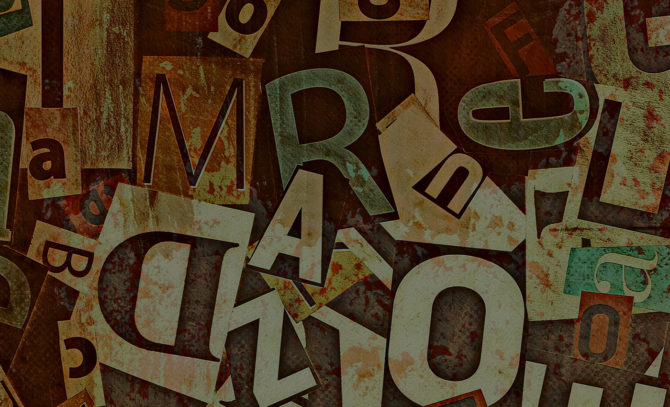 With these words, pronounced by Macbeth, Italo Calvino ends his combinatorial experiment of La taverna dei destini incrociati, in view of a dialectic between order and chaos, methodological rigor and randomness, rational and irrational. In comparison with the infiniteness of possible stories and the chaotic variety of existence, the author takes on the challenge to organize what can be narrated through the succession and the mutual intertwining of the figures drawn by a tarot deck, revealing their potential as a narrative machine that generates the fabulation: and if, especially in the final part of the Taverna, the subconscious, the insanity come to undo the geometrical disposition of the cards, the deck can always be reshuffled, and the game can start over.

Taking on the invitation to deconstruct the map of the world and to recreate it on the basis of a new scheme and from a different perspective, we students at the third year of the Ph.D. course in Filologia, Letteratura italiana, Linguistica propose an online conference devoted to a theme that involves the fields of studies that represent us and that we believe it can offer many opportunities for dialogue between young researchers: the map, accordingly translated in a textual context.

We accept original proposals for contributions among the following possible topics:

1) The map in the text. The image of the map, of the path, of the labyrinth, of the edge has seduced both travellers, who often use them as a guide for their writing in the recreation of their journeys, and poets and novelists. Without taking into account those classics that are now part of a common cultural horizon (for example Dante’s Comedy, Stevenson’sTreasure Island or Agatha Christie’s works), one can simply consider Giuseppe Ungaretti,

who in I Fiumi uses spatial coordinates to describe his past and retrieve his own identity, and Italo Calvino, who in Il Conte di Montecristo, a short story from Ti con zero, opposing two ways of mapping the prison of the Chateau d’If where Edmond Dantès and the Abbot Faria are trapped, can claim that the labyrinth of reality is only controllable with reason, to the detriment of experience. Therefore, having considered the potential of the map in organizing and putting the narrative matter in order and addressing it toward a particular purpose, we will evaluate original proposals which present authors and texts, individually or in comparison, who will have used maps and images linked to them to organise the plot and to transmit a specific idea of their self and/or the world.

2) The map for the text. In this section we will consider proposals that offer geoliterary itineraries of the author’s past experiences, interpersonal relationships, locations in and of the writing; positioning maps of the elsewhere and of the beyond, of the nonplaces, the heterotopias; quadrants built upon coordinates (east/west, north/south, in/out, centre/periphery, city/countryside, natural/artificial, terrestrial/extra-terrestrial, etc.) which allow to locate the text in a space and to study the impact of that space on the text.

3) The map of the text. A non-secondary aspect of the understanding of the text is the study of its genesis, evolution and transmission: mapping the different phases of elaboration, both via primary witnesses, such as autograph papers, and via secondary witnesses, such as epistolary exchanges, comments, indexes, the scholar can verify the development of the text and the motivation that led the author to rethink his work. Suffice it to say, Le ultime lettere di Jacopo Ortis, that change with the author’s political hopes, or Leopardi’s attempts to provide the Zibaldone with an index to give it an ideal interpretation. We will consider proposals that analyse the evolution of the text by a diachronic perspective to reveal the author’s working method and to help the interpretation of the text.

4) The map from the text. We will consider studies that examine particular structures and rhetorical and linguistic elements of a specific text or corpora (such as paratexts, notes, quotations, illustrations, syntagmas, keywords) which, beyond the evident subject of the work and memorial or diaristic writings, can be read as allusive signals and references to ideological and/or political declarations, hints or systems of self-presentation, self- definition and self-comment, functionally hidden in the text.

5) The map on the text. We will consider proposals that, in the field of metric and stylistic studies, highlight the formal mechanism of the literary work, the underlying schemes or structures, assuming them as a key for theorical and critical interpretation, in an inseparable association between the levels of signified and signifier.

The call is open to Ph.D. students as well as to recent Ph.D. graduates (maximum one year after receiving their Ph.D. degree). The payment of expenses is not available.

All the students wishing to apply must send in an anonymous form an abstract of their proposal within the 15/03/2021 at the address convegnofilletlin@gmail.com. In particular, the mail must have two attached file in .PDF format: the first one, named PROPOSTA, with just the proposal of a maximum of 300 characters (including spaces) and the title of the essay (not included in the maximum

characters); the second one, named PROFILO, with the necessmary personal information, such as NAME, SURNAME, BIRTH DATE, UNIVERSITY, PH.D. COURSE, MAIL ADDRESS, A SHORT CV WITH ANY EVENTUAL PUBLICATION, PREFERRED DAY AMONG THE 4TH AND THE 5TH OF JUNE AND THE TITLE OF THE PROPOSAL.

Each talk should last for about 20 minutes.
The notification of acceptance will be sent within the 31/03/2021. A link for connection will be published later.

If you have any doubts, please, do not hesitate to contact us at