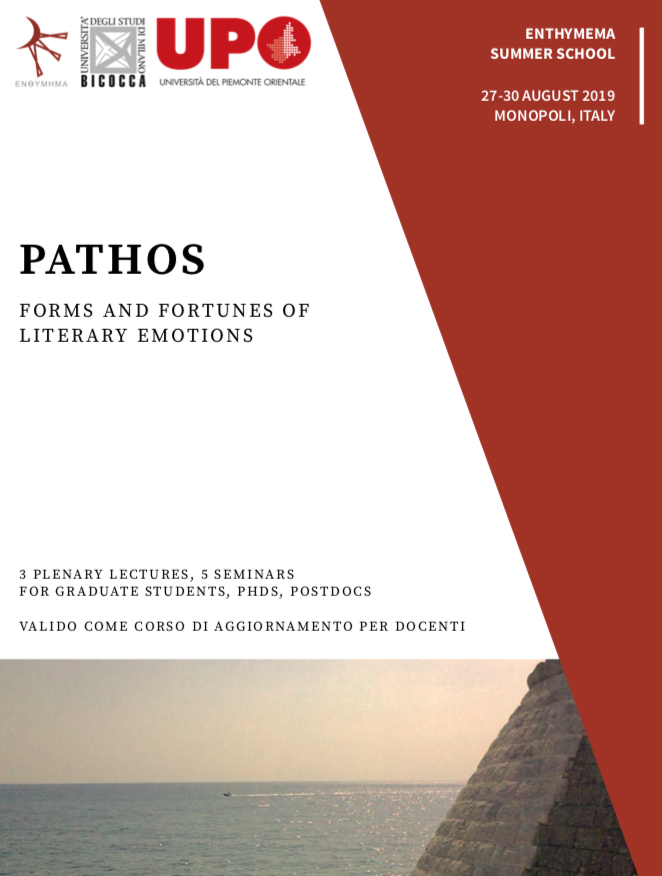 The goal of this summer school is to explore the role of emotions in literature, namely with respect to the excess of pathos in different forms and times.

Pathos has been a fundamental aspect of literature in every epoch. Great poetryhas always foregrounded its ability to represent feelings, evoke intense and vivid moods, and elicit readers’ emotions and empathy. On the other hand, thenovel – the genre dominating literary modernity – has been o!en accused of indulging in sentimental excess, giving too much space to melodramatic expression. Indeed, in Western cultures, there is a widespread suspicion towards pathos, which has o!en been identified as a shortcoming of literature. Great books – according to a common implicit assumption – can prompt reflection and laughter, but not tears: pathos only concerns lowbrow production.

The summer school is an opportunity to engage in a reflection on issues related to pathos in literature in the last few centuries. Different perspectives will be taken into account: specific literary works, reader response theory, cognitive narratology, transmedia adaptation, and publishing history.

The program includes 5 seminars and plenary talks by Karin Kukkonen – specialised in eighteenth-century literature and cognitive literary studies –Françoise Lavocat – leading scholar on the facts/fiction debate – and Paolo Giovannetti – expert of poetry and nineteenth-century Italian literature. Participants will be involved in dialoguing with scholars specialised in different fields and they will work on personal projects that will be presented and discussed during plenary sessions.

€ 160 (travels, meals, and accommodation not included)